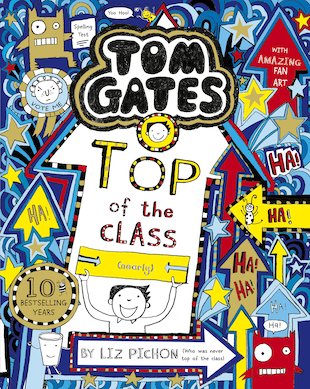 Now in paperback with new colour-in spines! How does this kid genius stay on top? Find out – and don’t be shy about laughing like a raving looniac too! Doodle hero Tom Gates is sharing his tips for success. Want to be like him? Just follow these simple rules. 1. Stay awake in lessons (it helps). 2. Don’t draw HILARIOUS pictures of your teachers. 3. AVOID the class bully. 4. NEVER let Mum and Dad touch your school planner. 5. Don’t let your grumpy sister BOSS you about. OK: Tom didn’t exactly follow his own rules. But he still rules the world (even if Mr Fullerman won’t admit it). Can Tom get voted onto the school council, and finally be KING of his class?