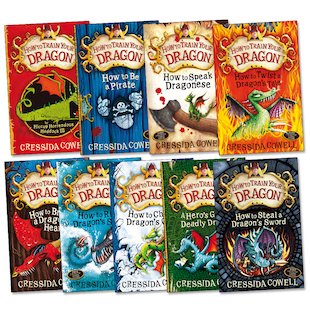 Long ago, on the wild and windy isle of Berk, a smallish Viking with a longish name stood up to his ankles in snow…

Hiccup Horrendous Haddock III is a nerdy, knock-kneed little Viking – not big or hairy or scary at all. As the chief’s son, he’s meant to be strong and valiant, but he’s the laughing-stock of the whole tribe. Hiccup prefers to think before he acts – not something bloodthirsty warriors are known for. Even worse, however terrifying he tries to look, he often just ends up looking quite… well… cute! As he faces bullies, pirates, dragons and other fearsome foes, will this hapless would-be warrior ever prove his might? Being a hero has never been so hard! Packed with fantastic cartoons and hilarious jokes, these wonderful tales of an unlikely little champ have now inspired a major Hollywood film!

“If you haven’t discovered Hiccup yet, you’re missing out on one of the greatest inventions of modern children’s literature.” Julia Eccleshare