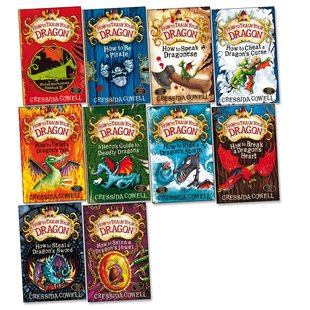 Hiccup Horrendous Haddock III is the puniest Viking you could ever picture. He’s not big or hairy or scary at all. As the chief’s son, he’s meant to be strong and valiant. Instead he’s the laughing-stock of the whole tribe. His knees knock, he thinks too much, and he doesn’t look terrifying – he looks cute! Will he ever be the mighty chief he dreams of becoming? Being a hero has never been so hard! Vikings, dragons, pirates and genius pencil cartoons: one of our favourite series of all time.

“One of the greatest inventions of modern children’s literature.” Julia Eccleshare