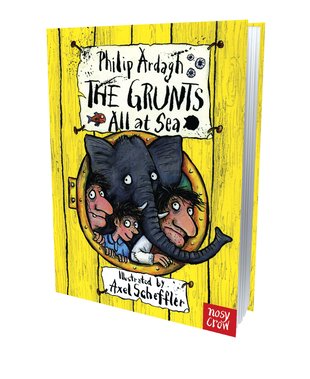 The Grunts All at Sea

Meet Philip Ardagh’s stupid and smelly Grunt family. They’re like The Twits… but funnier! If you love Mr Gum, you’ll adore the greedy Grunts, as grotty as they are hilarious! Like the Twits, Mr and Mrs Grunt are mean and gruesomely ugly. And this revolting couple also like to laugh at people less fortunate than themselves. But unlike the Twits, the Grunts don’t have the sense to stay at home (in their shabby caravan) and mind their own business. So when they get involved in a shady people-smuggling scam, how long will it be until they end up all at sea – with an elephant aboard?