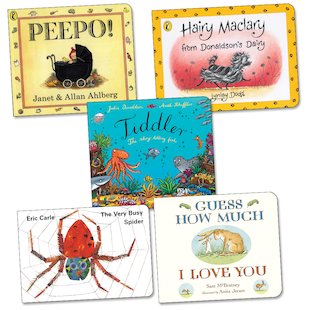 Timeless classics that deserve a place in every family home, in sturdy board editions. Imaginative gems of every kind from award-winning authors – sure to captivate the entire family! This marvellous selection of treats contains five of those essential stories that no childhood should be without: acclaimed modern classics, as well as time-honoured traditional favourites that parents and even grandparents recollect with glee. From the classic peekaboo excitement of Peepo! to the hilarious verses of Tiddler, get set for learning, laughter and sheer delight!