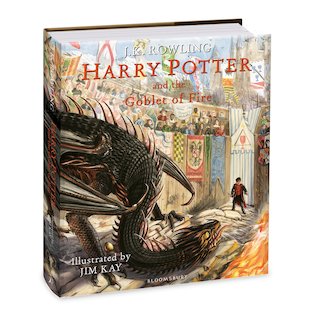 At last, it’s here – the illustrated edition of the game-changing novel where Harry’s whole world turns darker. (Except now it’s in colour, too!) A BIG event is coming to Hogwarts: the famous Triwizard Tournament. Eternal glory awaits the victor. OK, Harry knows he’s still too young to enter. But that won’t stop him dreaming of glory. Then, at Halloween, when the magical Goblet of Fire chooses the competitors, Harry is amazed to find his name picked out. Death-defying tasks, dragons and dark wizards lie ahead for Harry. Yet this is no simple game. Will he get to the end alive?