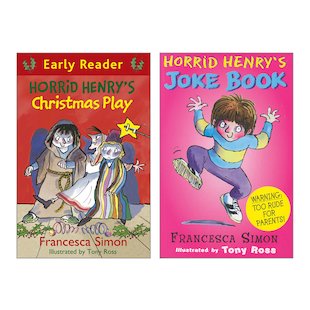 Put the ‘merry’ into Christmas with a cheeky Horrid Henry reader – plus a FREE joke book! Tee hee! Do you think the school nativity play is always lots of fun? So does Henry – and he really wants to be Joseph. But nasty Miss Battle-Axe has made him the inn-keeper. BORING!! See that wicked glint in Horrid Henry’s eye? We think he’s got a naughty plan to make his own part BIGGER! When you’re done with the story, start laughing at the jokes. Keep giggling all holiday long!