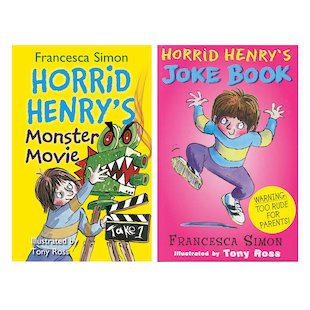 Classic laughs plus extra jokes. Giggle yourself silly with Henry! Tearaway Henry has two main hobbies: pulling horrid pranks and thinking up great ways to get rich. Now he’s devised a wicked plan that might let him do both: making his own super-scary movie! It’s bound to be a hit – right? But the laughs don’t stop there. Nope; they’re only just starting, as Henry goes for an Olympic gold medal in crisp eating, and shares his bedroom with two arch-enemies. Oh so funny! But do you want even more silly laughs? No worries: crack open Henry’s cheeky FREE joke book!