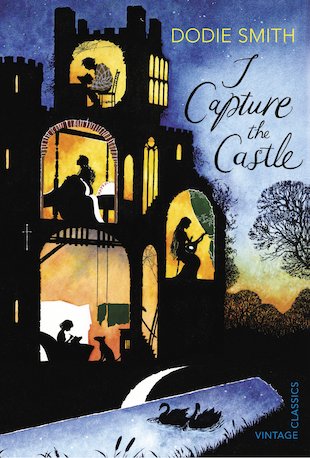 I Capture the Castle

“I have just remarked to Rose that our situation is really rather romantic, two girls in this strange and lonely house. She replied that she saw nothing romantic about being shut up in a crumbling ruin surrounded by a sea of mud.”

Set in the 1930s, Dodie Smith’s classic story of first love will touch all of your emotions. Joanna Trollope loves it, Nigella Lawson loves it, and you’ll adore it too. Seventeen-year-old Cassandra dreams of being a writer. Her eccentric family live in genteel poverty in a crumbling Sussex castle. Older sister Rose is bored, beautiful, and desperate to marry into money. Their exotic stepmother Topaz has a habit of striding through the countryside wearing nothing but her wellies. But when two wealthy American brothers arrive, Cassandra and Rose finally get their first taste of glamour, high society, and the joy and heartbreak of first love…

“I know of few novels that inspire as much fierce lifelong affection in their readers.” Joanna Trollope

“Everyone I’ve passed it on to has found it a hit – it works every time, for absolutely everybody.” Nigella Lawson