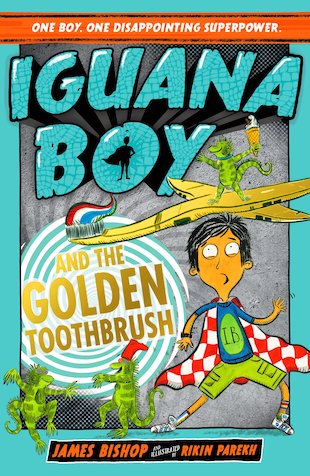 Iguana Boy and the Golden Toothbrush

What’s it like being the world’s most rubbish superhero? Just ask Dylan, aka Iguana Boy! He can tell you ALL about it. Not only does he have the rather underwhelming power of turning into an iguana. He also keeps EPICALLY FAILING his superhero missions. It’s getting embarrassing! But then a dastardly supervillain, Mind Bender, kidnaps all the other superheroes. He’s holding the world to ransom, demanding a special golden toothbrush. Can Iguana Boy sweep the floor with him?

Praise for the Iguana Boy series:

“HILARIOUS and so silly – superheroes, reptiles and pizza … AWESOME, why didn’t I think of that?!” Tom Fletcher

“It’s not often that you come across a children’s book with a voice as strong as Bishop’s unique spin.” Starburst Magazine