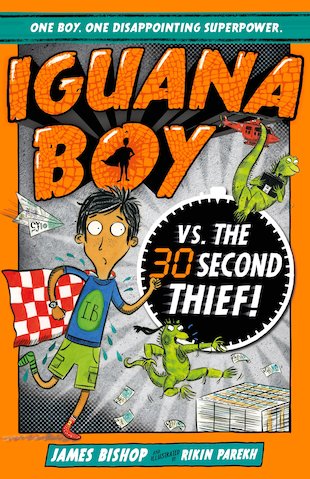 Somehow, in spite of having the lamest superpower ever, Iguana Boy has been accepted into the superhero collective. Dylan’s excited, and his iguanas are totally hyper! Recipe for success, right? They’re eagerly awaiting their orders to save the world. But the boss of the Superhero Collective, Ron Strongman, doesn’t have time for lowly superheroes like them. Will Dylan be saving silly cats from trees forever? It looks like it – until a new villain strikes in London. It’s Dylan’s chance to prove himself – in just 30 seconds or less!

Praise for the Iguana Boy series:

“HILARIOUS and so silly – superheroes, reptiles and pizza … AWESOME, why didn’t I think of that?!” Tom Fletcher

“It’s not often that you come across a children’s book with a voice as strong as Bishop’s unique spin.” Starburst Magazine