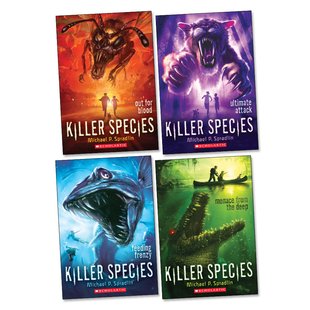 Genetically modified supercritters wreaking havoc? Better than a movie. Order pizza NOW. Emmet Doyle’s dad is a wildlife biologist – an expert on raptors. If there’s an unexplained predator strike, his dad gets called in. Can you feel a killer story forming? Then the pair are called to the Everglades to check out a scary creature found dead there. It’s clear this was not a native species. This is a man-made fiend. And it’s not the only one. From the swamps to the seas to the skies, the handiwork of evil Dr Catalyst could just about destroy the world. And as Emmet is about to learn, if you cross a madman, revenge is the only thing you can rely on.

Killer Species 1: Menace from the Deep

Killer Species 3: Out for Blood