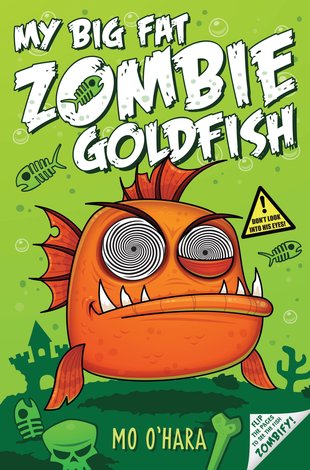 Sami was still holding the goldfish. ‘Swishy little fishy,’ she whispered, over and over. Frankie stared at her with his big, bulging, glowing eyes.

Tom’s big brother is an evil scientist who wants to experiment on Tom’s new goldfish, Frankie. Can Tom save his fish from being dunked in radioactive gunge? Er, no. In an act of desperation, Tom zaps Frankie with a battery, bringing him back to life. But there’s something weird about the new Frankie. He’s now a zombie goldfish with hypnotic powers. And he wants revenge! Now Tom has a difficult choice to make – save his evil big brother, or save his fishy friend? Finding Nemo meets Shaun of the Dead in two laugh-aloud stories about Frankie the big fat zombie goldfish!